A new study was published that highlights the link between inflammation in the body and mental illness. This is an area that I have been focusing on clinically and in training to physicians and pharmacists for the past twelve years, referring to the condition as “Sickness Syndrome.” There is a very clear link between inflammation in the body and mental illness. Addressing inflammation with a clear plan alleviates many of the symptoms associated with it including depression, anxiety and OCD. For long lasting results, we have to treat the cause of these symptoms rather then masking them. It doesn’t mean psychiatric medications are not helpful, it means we need to broaden the treatment to address one of the underlying causes-inflammation.  I have been researching and working with several forms of glutathione in clinical practice as a simple and effective treatment for “neuroinflammation.” This is an exciting time in medicine, with wonderful discoveries and connections being made that will help children and adults to experience more freedom and to think more clearly. 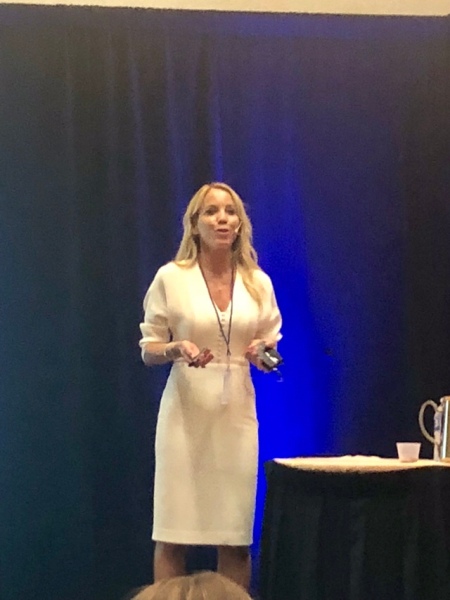 Dr. Gina just spoke at the Advanced Applications in Medical Practice conference in Scottsdale, AZ on the Advanced Brain Therapy program that she offers at Forever Ageless in Newport Beach, CA. Here are a few video clips from the conference. Call or email the office today to schedule and receive these same cutting edge treatments for improving cognitive health and treating mood disorders.

We look forward to seeing you soon and helping you to live your best life ever, with clarity, focus and happiness.

A new study finds decreased social anxiety among young adults who eat fermented foods. Further evidence of the connection between the gut and mood disorders, and hope for a better alternative to addictive benzodiazepenes.

Naturopathic medicine has known this for centuries but now there is some promising new research demonstrating that the health of the gut affects a woman’s brain, how she processes emotions and her response to stress.

Dietary changes to the bacteria living in our guts could have an impact on brain functioning, a new study suggests.

Researchers at the University of California, Los Angeles, found that regularly eating yogurt with probiotics, which contain “good” bacteria, seems to affect brain functioning in women. They said the proof-of-concept study shows it is possible to impact brain functioning by altering gut bacteria through diet.

The study, published in the journal Gastroenterology, was funded by Danone Research, which is the research arm of Danone, a company that produces yogurt and other dairy products. Some of the study researchers are Danone employees, but they had no role in the interpretation or analysis of results. Researchers noted that past studies have shown a gut-brain connection in terms of the brain sending signals to the gut. But this new study shows that the gut could also send signals to the brain.

Mounting Evidence: The Link Between Inflammation and Depression

A new study was just published in the Archives of General Psychiatry involving over 73,000 patients that points to the connection between inflammation in the body and depression.  I  identified this connection nearly 10 years ago, began publishing on it about six years ago, and coined the phrase “Sickness Syndrome” to help doctors to diagnose this prevalent cause for depression. I have been treating patients using this knowledge ever since.

It is time to take a new look at the underlying cause(s) of depression so that mainstream medicine can offer long lasting cures for this debilitating health challenge.

A new study, albeit on mice, further points to the link between inflammation and depression. I began publishing on this topic  six years ago. In our medical office I see the real world connection between mood disorders like depression, and inflammation in the body. It is always a pleasure to watch patients as they heal from debilitating symptoms, when we address this underlying cause.

Bloomberg reported on a research study revealing a link between female cancers and antidepressant use.

Scientists should more closely examine whether antidepressant drugs increase the risk of breast and ovarian cancer, according to a researcher affiliated with Harvard University whose review of 61 studies suggested a link.

The risk of cancer increased 11 percent on average for patients taking the medicines, according to a report that analyzed previous data and was published in yesterday’s issue of the peer-reviewed journal PLoS ONE. Read the full article by clicking here.

Preparing for a CME lecture (to air on PharmCon on June 9th, and categorized as live pharmacy hours for doctors) on  augmenting the side effects and risks associated with oral contraceptives and other synthetic hormones popular among women and teen-aged girls.  In addition to a significant increased risk in various cancers,  the synthetic hormones also decrease serotonin levels, further increasing the chance of a woman being prescribed anti-depressant medications which appear to further increase her risk of cancer!

A solution could be to take well researched immunomodulators like BRM4 if you take synthetic hormones, or to avoid these hormones if at all possible and turn to more natural options like Bioidentical Hormone Replacement Therapy.

In health and healing,